You are here: Home / Badgers / Ryan named a finalist for Coach of the Year honors 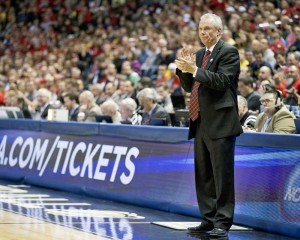 Ryan was voted 2015 Big Ten Coach of the Year, his fourth as UW’s head coach, and has guided the Badgers to Big Ten regular season and tournament championships.  With 31 wins this season, which ties the mark for the most in school history (2007-08), Wisconsin heads into the NCAA tournament as a No. 1 seed for the first time in school history.

The Naismith Men’s College Coach of the Year will be announced on April 5.

Ryan and the Badgers begin their run as a No. 1 seed in the 2015 NCAA Tournament on Friday when the Badgers face sixteenth-seeded Coastal Carolina in Omaha, Nebraska (8:20 p.m.).