You are here: Home / News / Sokaogon chair: changes to mascot law ‘a mockery of indigenous people’ 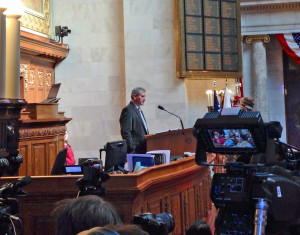 The state of Wisconsin’s tribes received some attention at the Capitol on Thursday, where lawmakers took a break from heated debate over right-to-work legislation to hear the annual State of the Tribes address, delivered by Mole Lake Sokaogon Chairman Chris McGeshik.

McGeshik drew applause early in remarks, when he referenced the end of a controversial mining project which was widely opposed by the state’s tribes. “When it comes to the Penokee Hills mine, we are not going to see that mine happen while I am here,” McGeshik said. Bad River Tribal Chair Mike Wiggins, Jr. had spearheaded tribal opposition to the Gogebic Taconite mine in Iron and Ashland Counties, and then-Lac Courte Oreilles Tribal Chair Gordon Thayer heavily criticized Republican lawmakers who wrote a new mining law, in his 2013 address. Gogebic Taconite said last Friday that it would pull out due to larger than expected wetlands on its proposed mining site near Lake Superior.

While McGeshik’s remarks had little of the sort of pointed criticism given by some tribal leaders in past addresses, he did ask for respect for tribal sovereignty. “Tribal sovereignty means a strong Wisconsin at the end of the day. The state of Wisconsin must believe that it is only as strong as the weakest tribal community,” he said. “The state weakens itself by opposing tribal ideas.”

McGeshik reserved his sharpest criticism for the subject of offensive mascots still being used in some Wisconsin public school districts. “We believe the recent decision to override the progress made with the state in regard to the school mascots to be a mockery of the indigenous people in the state and around America,” he said. “This contempt towards native people should be corrected by this legislature.” Republican lawmakers pushed through a law in 2013 that makes it much harder for tribes to challenge the use of race-based mascots, logos, and nicknames at public schools.

McGeskil concluded his remarks by explaining what the state of Wisconsin’s 11 tribes is not. “We aren’t destitute, and we aren’t distressed. We are not defeated. We will be strong, and together we will move forward. Miigwitch, and thank you for listening.”