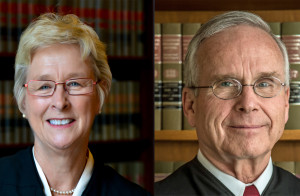 Voters statewide will weigh in next Tuesday on the race for the state Supreme Court, along with how the chief justice of the high court will be selected in the future. A proposed state constitutional amendment on the ballot would have the chief justice selected by a majority of the court every two years, as opposed to the current system where they most senior member fills the role.

Incumbent Justice Ann Walsh Bradley claims the change is being pushed by opponents of current Chief Justice Shirley Abrahamson and has urged voters to reject the proposal. In a debate last Friday, Bradley said “to change our constitution because you don’t like the style of an individual person would be a terrible mistake.”

But Bradley’s challenger, Rock County Circuit Judge James Daley, believes the amendment will improve the court by making the chief justice more accountable for their decisions, which help shape policy for the state’s court system. He also accused Bradley of opposing the amendment because, if re-elected to a third ten year term, she would be next in line for the position.

The amendment, and the state Supreme Court race, are on the ballot April 7th.