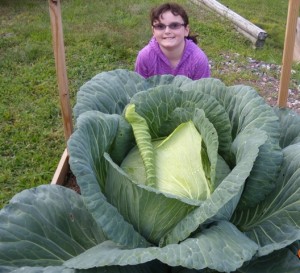 Free cabbage plants were distributed last spring to more than 11,300 Wisconsin third grade students, who took them home to grow during the summer. Teachers submitted a class winner in fall, and the state winner was randomly selected from these entries. The cabbage plants, distributed by Bonnie Plants, are the O.S. Cross variety, known for producing giant, oversized heads.

Olbrantz received her cabbage plant on April 14 and began growing it in a pot in the living room window. As the plant grew, her family helped her build a raised garden for her cabbage plant in the backyard. She watered her cabbage each day until she picked it on July 29. The cabbage is still being eaten and enjoyed by Olbrantz’s neighbors.

As the state winner, Riley received a certificate of achievement and a $1,000 scholarship from Bonnie Plants. Now a fourth grader at Newman Catholic Elementary St. Anne School in Wausau, she plans on becoming a veterinarian, because she loves animals and wants to help them.
Wisconsin ranks first in the nation in production of cabbage for sauerkraut, growing 27% of the U.S. total. The state harvested 2,900 acres of fresh market cabbage last year, a value of more than $10 million.