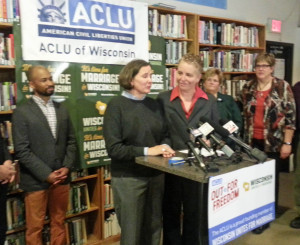 Couples celebrate after a decision striking down the gay marriage ban was upheld. (Photo: WRN)

The agreement announced Friday is intended to cover the legal fees and other costs of the American Civil Liberties Union of Wisconsin, which challenged the state’s 2006 constitutional ban on gay marriage in federal court. The amendment was struck down last year, and the decision was allowed to stand last fall after the US Supreme Court passed on reviewing the case.

The agreement filed in the United State District Court for Western Wisconsin states that a check for the full amount is being requested from the Wisconsin Department of Administration, which will “be delivered to Plaintiffs’ counsel promptly upon receipt.”