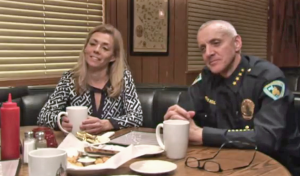 The narrative being reported in the national media following officer-involved shootings is having a “trickle-down” effect at the local level, according to Madison’s chief of police.

Chief Mike Koval believes law enforcement agencies should be trusted institutions, because cops are essentially stewards of the community, he said. “When we see the police behaving badly, and seemingly without the sort of accountability one would hope that you would see from the police department — or if there’s a lot of denial or excuse making — that becomes problematic for the entire profession.”

Koval said, nationally, more than 96 percent of the contacts between police and citizens are dealt with through presence and professional communication. Only 3 to 4 percent, he says, is through the use of force, such as a tazer, pepper mace, or a baton. And deadly force is much less than one percent. “As difficult as this is to grasp, just so that we’re clear, the use of deadly force by cops toward citizens is in and of itself the anomaly.” And, Koval said, officers are training to move away from deadly force all together by practicing non-lethal methods, such as tactical disengagement, looking for cover, and creating distance.

The raw emotion being seen across the nation after several officer-involved shootings is just “heart wrenching,” said Wisconsin Public Defender Kelli Thompson. She suggested everyone “take a deep breath and let the process play out” and wait for the facts. “That’s why we have the laws that we have; we have the investigative tools that we have; we have the prosecutor’s office; we have a strong public defense system,” Thompson said. “That’s so important and people want information but we have to do it correctly.”

Thompson said once the misinformation is out there — whether through traditional or new media — it’s hard to take it back. Thompson says having an independent investigation is very important. “We want people to have confidence in the criminal justice system and confidence in that investigation. That takes time,” she said, “and I think that’s where we see frustrations sometimes with people. It’s important that Wisconsin has taken those steps to try to rectify an issue.”

The Dane County district attorney is expected to give 48 hours public notice before releasing his decision in the officer-involved fatal shooting of Tony Robinson in Madison March 6th.