You are here: Home / Packers / Packers will honor Favre and Wolf this season

The Green Bay Packers today announced the organization will honor both Brett Favre and Ron Wolf in halftime ceremonies during the upcoming 2015 season.

Favre’s name and retired No. 4 will be unveiled on Lambeau Field’s north facade Nov. 26 and Wolf’s name will be unveiled next to fellow Pro Football Hall of Famers on the stadium’s east side on Nov. 15.

Favre’s No. 4, which will be retired July 18 at the Packers Hall of Fame Banquet, will join the 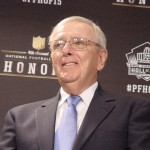 Favre’s ceremony will take place during halftime of the Packers/Bears game on Thanksgiving night at Lambeau Field.

Ron Wolf will be inducted into the Pro Football Hall of Fame Aug. 8 in Canton.  He’ll be at Lambeau Field for the Packers/Lions game on Nov. 15th and will be honored during halftime.