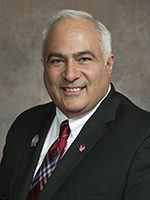 A proposed $300 million state funding cut to the University of Wisconsin System budget would be too hard on the system’s two year campuses, like Marshfield and Wausau. That’s according to State Representative John Spiros (R-Marsfield), who is working with other lawmakers including, Representative Dave Heaton (R-Wausau) to try saving the two year campuses from the budget cuts.

“In our two year schools, I know that we have one in the campus here at Marshfield, there’s campuses throughout that would be hurt immensely from those budget cuts,” Spiros said. The motion would exempt these smaller campuses from the cuts.

Spiros said he’s willing to look at the UW budget cut plan offered by Governor Scott Walker, but that the larger four year campuses like Madison are more able to adapt to the losses than the smaller two year campuses. “The UW being an institution, you know, in Madison, as big as it is, I think we’re going to look at the budget cuts, but no matter what they do, I want them to understand that these two year colleges are funded a little bit differently. They’re not going to be able to withstand things as much as a large college like them.”

Spiros said the UW budget cuts proposed by the Governor will likely not pass in their present form. Several Republicans want smaller cuts, and most Democrats want no cuts at all to the University of Wisconsin budget. Spiros recently held listening sessions in his district regarding the budget on March 23rd in Marshfield and April 6th in Rib Mountain. He said over 200 citizens came out to share their thoughts and concerns regarding the state budget.