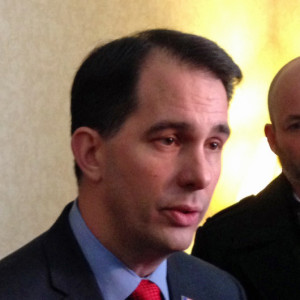 He famously punted when asked for his views on evolution during a visit to the UK in February. And on Earth Day, Wisconsin Governor Scott Walker stopped well short of answering whether or not he believes in man-made climate change.

“I believe that the government needs to make sure that we balance between a sustainable economy and a sustainable environment, and that’s the focus I’ve put on is trying to find way to balance both those,” Walker said in response to a reporter’s question during a stop in Appleton on Wednesday.

“I’m going to talk about things that we can do that both sustain the environment here, that allow us to have a healthy and vibrant environment at the same time we’re able to sustain economy, and I think there’s got to be a positive balance, and I think that’s where the debate in this state and this country should be. How do you do both?”

Walker, who was in Appleton to attend a groundbreaking ceremony for a local business, has had limited interaction with reporters in Wisconsin of late.

Walker has had a busy travel schedule as he contemplates making an official announcement that he’s running for president. The Republican Governor, recently back from leading a state trade mission to Germany, met privately with Republican state legislators in Des Moines on Tuesday. Early Iowa caucus polls show Walker leading the large field of potential Republican candidates.