You are here: Home / News / Strobel sworn in to Wisconsin Senate 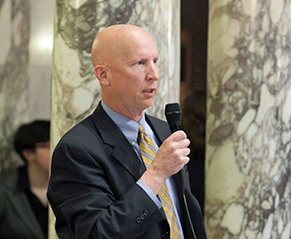 The Wisconsin state Senate’s newest member is a conservative who says he’s ready to work on key Republican issues.

Duey Stroebel won a special election for the 20th District seat triggered by the election of former Senator Glenn Grothman to Congress last fall. He was sworn in on Tuesday.

The Cedarburg lawmaker, who served previously in the Assembly and who was defeated in the Republican primary for the House seat which Grothman later won, said he wants to see the prevailing wage completely repealed.

“The Wisconsin Taxpayers Alliance – and I believe conservatively – says out of the blocks the state of Wisconsin will save $200 to $300 million every year,” if prevailing wage is repealed.

Strobel holds two degrees from the U-W Madison and said he loves the U-W System but supports proposed cuts to it which are contained in Governor Scott Walker’s budget.

“I’ll tell you what, there is some fat there,” Stroebel said. “When you look at their administration and the growth of it relative to other factors, i.e. spending, i.e. student enrollment, that is on a whole different curve that needs to be bent.”