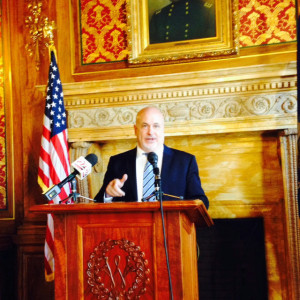 Divisions among congressional Democrats over fast track authority for a new trade deal are mirrored among Wisconsin’s representatives in Washington, D.C., where one Democratic member of state’s congressional delegation is issuing a warning about the deal.

“While 600 people have been negotiating this, largely corporate CEOs, it hasn’t been the public, it hasn’t been members of Congress,” said Representative Mark Pocan, a Democrat from Madison. “We need to have our say as well.”

Last week, key congressional leaders agreed on legislation to give President Obama special authority to finish negotiating the Trans Pacific Partnership. But there’s some push back from the president’s own party. “On the for side, you’re going to find that it will be House Republican leadership pushing this, and while there’s some Democratic support in the Senate, the bill that was introduced didn’t have a Democratic sponsor from the House,” Pocan said at the state Capitol last Friday. “That says a lot about the problems that they’re having.”

Pocan said passing fast track authority will severely limit the ability of Congress to amend or even debate the TPP. “So if we haven’t been involved up to this point, at what point do we get involved?”

Requests for comment on the TPP were made to other members of Wisconsin’s congressional delegation, but none responded. However, La Crosse Democrat Ron Kind has a statement regarding the deal on his website. “A potential TPP agreement may present an opportunity for the United States to expand trade and investment with a large and fast-growing market,” it says. “While autos and financial products will be an important topic, I will also be carefully watching the provisions that affect our industries in western and central Wisconsin like agriculture and manufacturing, especially those that affect small businesses.”

In January, according to Politico, Kind spoke favorably about fast track. “You can complain about [the fast-track bill] all you want, but if you allow a Republican Congress to amend and change [future trade deals] you’re going to end up in a worse position than what you started with,” Kind said. “It doesn’t make sense for a Democratic member to oppose it.”

Over the weekend, The Western Wisconsin AFL-CIO, issued a press release opposing the fast track deal. “The Fast Track legislation introduced this week in congress is ‘a crippling of democracy’ and is not the way Washington DC should be doing business.”

The labor group noted that Pocan and U.S. Senator Tammy Baldwin have been pushing “to preserve transparency and accountability in international trade agreements,” and that Pocan recently received an “A+” on his report card on this issue from the South Central Federation of Labor. “Unfortunately, if the WWAFLCIO was to issue a similar report card for Mr. Kind, he would receive an ‘F'”.