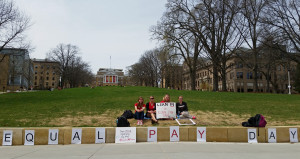 Proposed legislation aims to close the “pay gap” between and men and women in Wisconsin. Republicans in the legislature repealed the state’s Pay Equity Enforcement Law in 2012, after just two years on the books.

“After working on this bill for 10 years, finally getting it passed into law and signed by Governor Doyle, when the Republicans took control again, one of the very first things that they did was repeal the Equal Pay Enforcement Act,” said state Representative Christine Sinicki (D-Milwaukee) who along with state Senator Dave Hansen (R-Green Bay) introduced the new measure on Tuesday – Equal Pay Day.

“Even though equal pay has been the law federally since 1963 and in Wisconsin since 1945, women are still often paid less than men 60 years later. This holds true even when women match or exceed their male colleagues in education, skills and experience,” Hansen said. “This gap in pay is costing Wisconsin women and their families on average $10,000 per year. As a result, Wisconsin families have less money to support their families and our economy.”

“It’s like 86 weeks worth of food that they could buy if they were paid equally,” said Sinicki. “They would have seven more months of rent or mortgage payments, 2800 additional gallons of gasoline. That’s a lot that we’re taking out of these women’s pockets. If women have money, women are going to spend that money, it’s going right back into the economy. Some people are going to question why I’m doing this all over again. Because it’s worth it, and if it takes another 10 years to get this done again, that’s what it takes. But I’ll get this done again.”