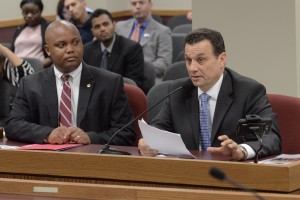 A change to Missouri’s policy on the use of lethal force by police has the support of a man who pushed for similar changes in Wisconsin, after police fatally shot his handcuffed son in 2004. The legislation (HB 1207) is sponsored by Representative Shamed Dogan (R-Ballwin). It would require an independent investigation when an officer uses deadly force. It also must be conducted outside of the agency where the death took place.

Emotional testimony was offered by Michael Bell as he described why he thinks such an investigation is important. Bell told the committee he thought the police investigation of his son’s death was deeply flawed from the beginning.

“Within about two days, they had completely found themselves justified in the shooting, before witness statements were taken, before autopsies were complete, before crime lab reports were done,” said Bell. His son Michael was shot in the head at close range by a Kenosha officer in the family’s driveway.

Bell’s campaign culminated when Wisconsin Governor Scott Walker signed the measure into law in April of last year. The bill was prompted by the death of his son, along with the deaths of Paul Heenan, fatally shot by a Madison police officer in 2013, and Derek Williams, who died after begging for help and gasping for breath in the back of a Milwaukee police squad car in 2011.

Representative Dogan told a house committee Tuesday that people need to have faith in law enforcement and our justice system. “In my area, in St. Louis County, we do not have that confidence right now,” said Dogan. “The purpose of this bill is to try and reinstitute that confidence by having an outside investigation whenever there is an officer involved death.”

Several bills dealing with the deadly force issue have been filed this session in Missouri, in the wake of the fatal shooting of Michael Brown by Ferguson police officer Darren Wilson in August of 2014.