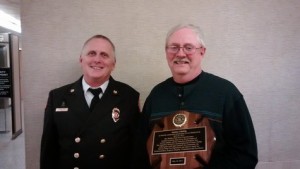 Phillip was leaving the UPS distribution center in Stevens Point April 20th overnight, and that’s when he said he noticed something that didn’t seem right.  “We were just getting ready to pull out of town, and I noticed a flaring in the garage, and when I finally drove over there and saw what was going on, I figured it was about time to get somebody out of the house.”  Phillip was able to awaken six people sleeping in an RV parked in the driveway close to the burning garage, and then help get the RV owner’s mother out of the house.

The seven people Phillip woke up were all very exhausted, WSAU reports, as they had just finished playing UW Stevens Point’s annual Trivia contest a couple of hours before the fire.

Stevens Point Fire Chief Robert Finn has no doubt Phillip’s actions in just over four minutes kept seven people alive.  “Mr Phillip put his actions and disregard of his own life so other people could survive, and never though twice of it. In my mind, that makes him a hero.”

When the fire department’s first companies arrived, the garage was totally involved and went through the roof in the back and was already extended into the house.”

Finn says because of the characteristics of the fire, and where the RV was parked, he has no doubt Phillip saved seven lives that morning.

James Phillip was given the Meritorious Service Award by the City of Stevens Point Monday night. It’s the first time a civilian has ever received the award.