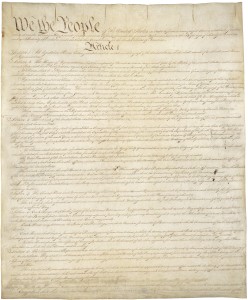 It appears more likely Wisconsin high school students will have to pass the civics part of the U.S. citizenship test before they can graduate.

“Some of the questions include, ‘How many justices are on the supreme court? What do we call the first ten amendments to the Constitution? Who vetoes a bill?'” Edming said, “These may appear to be relatively simple questions for many, but for many young Americans they are not.”

At a recent public hearing in Madison, Edming cited a study conducted by the Annenberg Public Policy Center at the University of Pennsylvania. “It found that only 36 percent of adults could name all three branches of the government and other 35 percent could not name any.”

The GOP-controlled finance panel decided to make the requirement part of the budget along with thousands of other items, which makes it easier to pass than a separate bill.

Supporters say it would encourage more young adults to get involved with government.

Under the budget measure, students would have to answer 60 of the 100 questions correctly in order to graduate.

Public school students would have to pass the test, as well as those in charter and voucher schools. Students can take the test as many times as necessary.