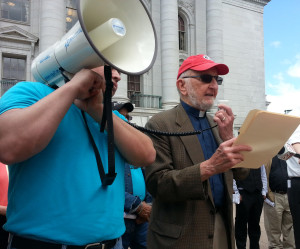 A broad coalition of religious and social justice groups are blasting a decision to increase funding for Wisconsin prisons in the state budget.

The Joint Finance Committee approved an extra $5 million for the Department of Corrections last week, which is expected to fund the incarceration of a thousand more people over the next biennium. The Reverend Joseph Ellwanger says the state should be focusing on ways to reduce that projected growth, instead of just providing more funding to keep people incarcerated.

Ellwanger told a group of about a hundred demonstrators at the state Capitol Wednesday that they should not have to accept the DOC’s “prophecy of an increase” as just being inevitable. He argued the state should instead be focusing its resources on treatment and diversion programs, rather than just sending more people to prison. “You can keep 4,000 a year out of prison by simply placing parolees with a mere rules violation into community based sanctions, instead of revoking them and sending them back to prison,” Ellwanger said.

Several states have seen inmate populations go down and have even closed prisons by backing those types of programs. The Reverend Willie Brisco said that $5 million could be used to divert thousands of people from prison or give a thousand kids a better education.

The coalition, which included groups such as WISDOM and MICAH, delivered a letter to legislative leaders and the DOC secretary, calling on them to explore programs that can help reduce the prison population…instead of planning on making it grow.