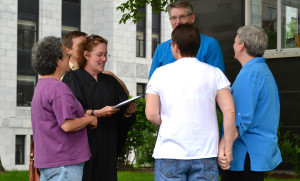 The state Department of Health Services says nearly 33,000 people got married in Wisconsin last year, up about 2,800 from 2013. It’s the highest rate reported in the state since 2007, and Megin McDonell with Fair Wisconsin says same-sex couples contributed more than their fair share to that number.

The state did not specifically track the number of same-sex marriages performed since U.S. District Judge Barbara Crabb ruled last June against Wisconsin’s constitutional amendment banning gay marriage. However, McDonell says at least 500 such weddings were performed during the first week in June where clerks were issuing licenses.

Marriages were put on hold again until the fall, when the U.S. Supreme Court declined to hear an appeal, effectively upholding the ruling that struck down the ban. McDonell says gay marriages have continued since then, with many couples now taking some extra time to plan their weddings.