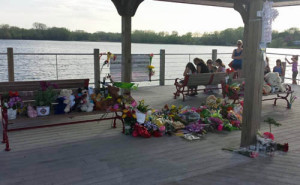 A memorial on the Trestle Trail Bridge. (Photo: Mike Kemmeter)

A Neenah woman says she’s grateful for the outpouring of support from the community, in the wake of a mass shooting on Menasha’s Trestle Trail bridge last month that killed three people, including her husband and one of her children.

In her first statement since the May 3rd random shooting, 32-year-old Erin Stoffel said she misses her husband and daughter, and her pain is deep. Thirty-three-year-old Jon Stoffel, and 11-year-old Olivia were killed by a gunman on the popular trail. The shooter took his own life.

Erin was shot three times. She continues to recover at Theda Clark Medical Center and said her doctors tell her she’s making progress, but there’s still a long road ahead for her.

Stoffel got her seven-year-old son and five-year-old daughter off of the bridge after she was wounded. She said she cherishes her visits with them, at the hospital, and with the help of God, she will be strong for them.

Stoffel described her husband as incredible, selfless, and funny. She said Olivia was the sweetest, dear daughter, with a heart of gold.