You are here: Home / Education / Czaja will re-write teaching provisions in budget 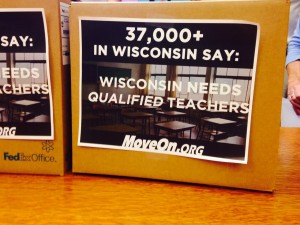 The author of controversial budget language dealing with qualifications to teach in Wisconsin public schools is proposing changes to the provision. State Representative Mary Czaja (R-Irma) said she’ll rewrite the provision before work on the budget is completed. The original language would allow school districts to hire any individual with a bachelor’s degree to teach core subjects, including mathematics, science and English, without any formal teacher training.

“What we did to clarify the intent – that this is going to replace the four-year degree teacher – is we’re going to say that they cannot be a full-time employee of the district,” Czaja said. People hired to fill the positions would also only be allowed to teach in the district where they applied.

Also, Czaja will now require that teachers in non-core subjects do have a high school diploma instead of just the relevant experience referenced in the initial language. “We’re going to require that they do have at least a high school diploma equivalent,” Czaja said. “That’s for the cabinet-maker to teach woodworking, the auto mechanic to teach auto shop class.” The non core teachers would also only be part-time hires.

Czaja said that her intent has been to assist rural school district in finding teachers for difficult to fill positions. She proposed the language changes on Wednesday, the same day opponents of the concept announced that they’d collected 37,000 signatures. Doctor Todd Lilly from the School of Education at Edgewood College says lowering standards runs counter to want districts want. “Districts are telling us that they want more out of our students, not less,” Lilly said.

While Czaja has pitched the changes as a way to help rural districts, she hasn’t referenced any specific requests for them. State Senate Janet Bewley (D-Ashland) said she hasn’t heard any support. “No one has come out to support lowering standards as a solution,” she said. “Instead of saying ‘okay, we’re going to have quality teachers,’ we’re going to have anybody come along, and we’re going to call them a teacher,” said state Senator Chris Larson (D-Milwaukee). “It’s not a real solution.”