You are here: Home / News / Democrats call for head of Wisconsin jobs agency to resign 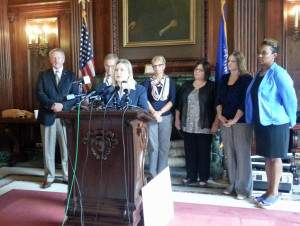 Democrats who sit on the board of the Wisconsin Economic Development Corporation are calling for the resignation of CEO Reed Hall, following revelations that the agency gave $124 million to businesses without doing a full review of the awards.

The 27 awards were detailed in nearly a thousand pages of documents released last week by the job creation agency. Democratic Sen. Julie Lassa and Rep. Peter Barca (D-Kenosha) said Wednesday that it’s just the latest in a long line of problems. Lassa said “in light of the serious challenges facing the agency…it is clear WEDC needs new leadership.”

WEDC spokesman Mark Maley noted that the awards detailed in the documents were all made before Hall was CEO, and also pointed out that 76 percent of them were approved by board members, which included Lassa and Barca.

Maley also argued that the agency has been “working diligently” to compile and review those documents in advance of next month’s board meeting, and they were provided to the board and media “as soon as that review was completed.” Lassa contends that the late Friday afternoon release amounted to a “document dump” though, and that the agency is “attempting to give the appearance” that is being responsive.

Maley did not immediately respond to a request for direct comment on calls for Hall’s resignation.