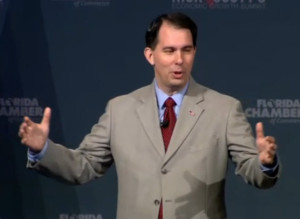 Wisconsin Governor Scott Walker spent Tuesday morning in Florida, where he addressed a crowd of Republicans at an economic policy forum.

Speaking at Florida Governor Rick Scott’s Economic Growth Summit in Orlando, Walker touted his record on lowering unemployment in Wisconsin and his historic fight against union groups. Walker’s speech also touched on many of the same themes he’s spent times discussing in other states, as he considers a potential 2016 presidential bid.

The governor offered several examples of how Wisconsin has worked to grow its business climate, along with some ideas for how to improve the situation on the federal level. Among those is a push to reduce federal regulations and return more decision-making power to the states. Pointing to the Environmental Protection Agency, Walker argued that every state has an equivalent agency that would be much more effective, efficient, and accountable.

Walker also addressed a question on how the GOP can get more people under the “Republican tent,” which he said will require going “to places where Republicans typically don’t go.” He provided an example from his 2014 reelection campaign, where he made gains among 18 to 24-year-old voters, something he said is “almost unheard of for a Republican.”

Walker is not expected to make an official decision on running for president until after work on the state budget is complete. He was among several possible 2016 presidential candidates who are scheduled to address the summit.