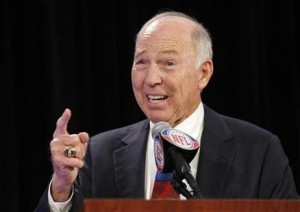 The family of Green Bay Packers legend Bart Starr say he’s taking part in a clinical trial using stem cells as he recovers from two strokes and a heart attack.

According to the family, Starr returned home Friday from the first of two treatments.

“While we welcome everyone’s interest and support of Bart’s health, at this time, we’d like to allow him a chance to fully participate in the clinical trial and let the results, if any, to speak for themselves,” a statement released through the Packers organization reads. “At an appropriate time in the future, our family looks forward to sharing the details of Bart’s participation in this most important clinical exploration of what role stem cells may play in the treatment of stroke.”

The statement goes on to thank fans for their love, prayers and support. The 81-year-old former Packers quarterback and coach suffered the strokes and heart attack last September.