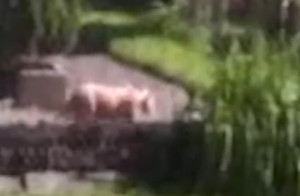 Amateur video shows what some have reported is a lion that’s been spotted in Milwaukee.

The search for a possible lion spotted in the Milwaukee area took a painful turn for a pit bull, after the animal was shot in the leg.

Milwaukee Police say the dog was shot Tuesday evening, after a caller reported seeing what “appeared to be a lion or cougar walking past his home.” While investigating, another call came in about a suspect firing a gunshot at a stray pit bull in the area. The dog was taken to the Milwaukee Area Domestic Animal Control Commission for treatment, and is recovering. Police have not been able to identify the suspect who shot the animal.

Police say they have received more than two dozen calls about a possible lion since Monday, which they have followed up on. So far though, there have been no confirmed sightings of the animal. The department is urging anyone who spots the animal to contact police and not to attempt to capture it.