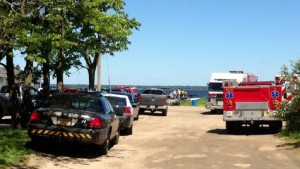 The body of a Maryland man who went missing Wednesday morning in Shawano Lake has been located. Shawano County Sheriff Adam Bieber said the body of 45-year-old Norman Robertson was spotted by a local businessman who had gone up in a plane to help in the search.

Robertson’s body was located east of Schumacher’s Island, which is not near the search area on the southwest side of the lake.

Robertson was from Kensington, Maryland, and had been in the area for a family reunion. A search for Robertson had been underway, after he jumped into the lake when his 10-year-old son fell into the water trying to climb into the family’s pontoon boat. That was around 11 a.m. Wednesday.

Deputies said high winds pushed the boat away from the father and son, while efforts to reconnect were hampered when a tow rope became stuck in the boat’s propeller. The boy was able to swim to a shallow area of the lake, where he was rescued by emergency personnel.