You are here: Home / News / ‘I am not intimidated,’ Walker tells protesters at Iowa State Fair 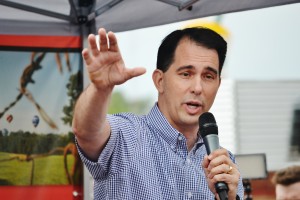 Republican presidential candidate Scott Walker delivered a message to protesters who were in the crowd, booing his speech at the Iowa State Fair this morning “You want someone who’s tested? I’m right here. You can see it. This is what happened in Wisconsin. We will not back down.”

The Wisconsin governor was in Des Moines as he continues his efforts to secure a strong showing in next year’s Iowa caucuses. “The left doesn’t want me to be your nominee ’cause they know I don’t just talk, I actually deliver on my promises,” Walker yelled.

About 50 protesters took a bus from Wisconsin to Des Moines to be on hand for Walker’s speech at The Des Moines Register’s Political Soapbox. Walker supporters in the crowd cheered, while the protesters booed and a few waved signs periodically. Walker kept talking over the din. “I am not intimidated by you, sir, or anyone else out there,” Walker said. “I will fight for the American people over and over and over and over again.”

Tatiana Anderson is one of the protesters. “Me and 50 other people came all the way from Wisconsin just to let people of Iowa know what is going on and we won’t stop here,” she said. “We will be everywhere Scott Walker is because he is representing us with all lies.”

Walker walked around the fairgrounds for a while, surrounded by protesters and the media. The latest CNN poll of likely Iowa Caucus-goers finds Walker in third place, behind Donald Trump and Ben Carson, and just ahead of Carly Fiorina – all candidates who have never before held elected office.

Walker began his speech to fairgoers with an emphasis on his status as someone who’s never before held federal elected office. “I’ve got to tell you, these days I’m not just frustrated with the president and with the Democrats in Washington, I’m frustrated with the Republican leadership in Washington as well,” Walker said, to cheers. “…I talk to voters all the time to voters in this state and around the country who say ‘We want to send a message to Republican leaders in Washington that when you make promises on the campaign trail, we want to see it.'”