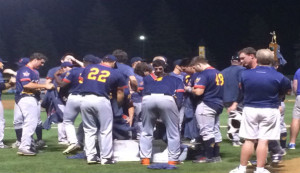 The Kenosha Kingfish beat the St. Cloud Rox on Friday night to claim their first Northwoods League Championship in their second year of existence.

The Kingfish captured the second game of the best-of-three series 8-1 over the Rox, sweeping the series in 2-games.  The Kingfish went 48-24 in the regular season and earned a spot in the championship series with wins over La Crosse and Madison.

The Kingfish had 14 hits on the night.  They also drew seven walks and took advantage of three St. Cloud errors.

E.J.  Trapino (Wright State) made the start for the Kingfish and picked up the win.   Trapino pitched five innings and gave up one run while stranding several runners on base.  He also walked  two and struckout six.