You are here: Home / News / Pocan says veto of Iran deal opposition can be sustained 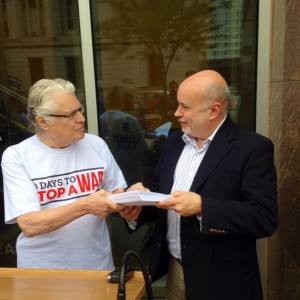 Throwing support behind the Iran nuclear deal, groups rallied in downtown Madison on Wednesday to thank their congressman for his work on the issue. A House vote is expected next month on a resolution opposing the deal, and President Obama has said he’ll veto that action.

“We feel that we are in a position to uphold any veto in the House,” said 2nd District Representative Mark Pocan. “We think we have enough votes. We’re still reaching out to members who are undecided, making sure that people who are undecided have all the information that they need.”

Former state AFL-CIO director David Newby was among the group who rallied outside Pocan’s Madison office, and presented him with hundreds of statements in support of the Iran deal, from constituents. “We are here to be part of the effort to ensure that there are not enough votes in Congress to sink this deal,” Newby said.

Pocan said the deal, negotiated with the Iranian government by the U.S, U.K., Germany, France, Russia and China, represents the best opportunity to curtail Tehran’s quest for a nuclear arsenal. “After decades of sanctions, they’ve continued to be able to move forward” towards that goal, he said.

Proponents say the deal would roll back Iran’s capability to enrich enough uranium to be able to produce a nuclear weapon for a decade or more. Opponents are concerned about Iran’s ballistic missile program, its support of terrorists, and its threats against Israel.

Republican members of Wisconsin’s House delegation were generally critical, when the White House announced the final parameters of the settlement last month. Pocan’s fellow Democrat, Representative Ron Kind of La Crosse, recently returned from a trip to the region, where he met with Israeli officials. Kind has not yet decided if he will support or oppose the Iran nuclear agreement, but said the trip will help put several issues into perspective.