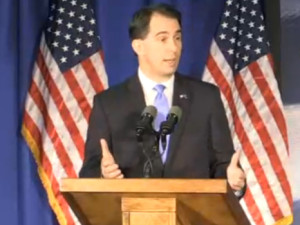 Gov. Scott Walker at The Citadel in South Carolina.

Wisconsin Governor Scott Walker laid out some of the key parts of his foreign policy strategy Friday, during a speech to military cadets at The Citadel in South Carolina.

Walker, who is seeking the Republican presidential nomination, focused heavily on the threat of radical Islamic terrorism. He told cadets “It will not go away overnight. This is a generational struggle. And these radical groups will continue to grow if we do not destroy them.”

The governor focused heavily on ISIS, an Islamic militant group operating out of Syria, which he called “the best-armed and best-funded terrorist organization in the world.” He blasted President Barack Obama and former Secretary of State Hillary Clinton, who is seeking the Democratic presidential nomination, for pushing a foreign policy that has seen the US losing its global influence. “The Obama/Clinton foreign policy of leading from behind is not working – and we’re heading toward a disaster,” Walker said.

Walker also took aim at the Obama administration’s handling of a proposed nuclear deal with Iran, which would see the Middle Eastern nation scaling back its program in exchange for lifting economic sanctions. He noted that the move comes as Iran continues to hold Americans in captivity. “It is a stain on our nation’s honor that our countrymen languish in Iranian prisons while we are freeing up billions of dollars for the world’s leading sponsor of terrorism and legitimizing its massive nuclear program,” he said.

Walker’s plan calls for securing the nation’s border with Mexico, strengthening the U.S. military to combat terrorism abroad, and building better alliances in the Middle East. He also proposed creating a no-fly zone over Syria and pledged to block the Iran nuclear deal on day one, if Congress fails to stop it from passing. “I reject the Obama-Clinton false choice between this bad deal and another war. I vow to turn up pressure across the board on Iran. I refuse to live with a deal that threatens our safety and that of our closest allies.”

Walker said the whole world is watching how the U.S. confronts the challenges of the Middle East. He asked, “How can we deter our sophisticated adversaries in Eastern Europe and competitors in the South China Sea if we cannot defeat the barbarians of ISIS and roll back the theocrats in Tehran?”

The governor said that, if he’s elected commander in chief, he would send the message that “the retreat is over. American leadership is back and, together with our allies, we will not surrender another inch of ground to terrorists or any other power that threatens our safety.”