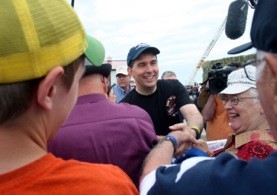 A new national poll has Wisconsin Governor Scott Walker in sixth place, among GOP presidential candidates. Walker polled at 6% in the latest survey from Quinnipiac University. A month ago, Walker was second in the same poll, at 13%.

Donald Trump continues to be the runaway leader with 28%. Ben Carson is next at 12% followed by Jeb Bush, Marco Rubio, and Ted Cruz — each with 7%. On the Democratic side, Hillary Clinton has a slimmer lead over Bernie Sanders. The poll found Joe Biden – who’s still considering a run – is the only Democrat who would beat Trump now.

Nearly 1600 registered voters were surveyed from last Thursday through Tuesday. The Republican candidate polling has an error margin of 3.8%.