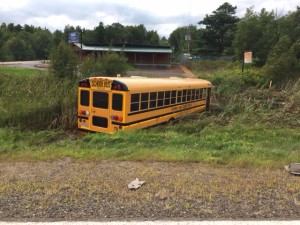 Authorities continue to investigate a Saturday afternoon accident in which 2 people were killed and 16 people were injured. It happened at Highway 63 near Cumberland in Barron County, when a car collided with a school bus. The driver of the car, 29-year- old Tiffany Hostetler of Rice Lake and her 3 year old daughter Elanora Hutton, were killed. Another passenger in the car, 5 year old Marshall Hutton, was critically injured and flown to Regions Hospital in St. Paul for treatment.

Barron County Sheriff Chris Fitzgerald said the driver of the bus, which was carrying the Spooner High School varsity volleyball team, did the best he could to avoid the collision. The bus came to rest in a ditch partially submerged in water. Everyone inside was all able to get out of the bus via the emergency exit safely. Eleven students sustained minor injuries and were released to their parents.