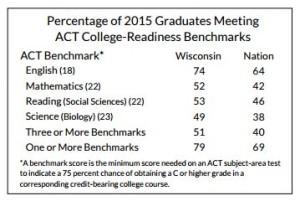 Wisconsin once again had the second-highest scores in the nation on the ACT college entrance exam.

The Department of Public Instruction says 2015 high school graduates had an average composite score of 22.2, out of a possible 36 on the exam. The score is unchanged from last year, and it ties Wisconsin with Iowa for the second best score in the nation among states where the majority of graduating students take the test. Top scoring Minnesota was a half-point higher.

About 73 percent of the public and private school graduates in the state took the ACT this year, compared to 59 percent nationally. Wisconsin students averaged 10 points higher than the national benchmarks in math and English.

Almost all Wisconsin juniors also took the ACT as part of their state evaluations. Those results are due out this fall.