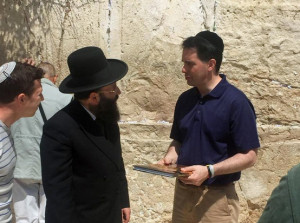 Any state elected official who runs for a federal office would have to file detailed travel reports with the state, under a bill being introduced at the Capitol.

The legislation, co-sponsored by state Sen. Dave Hansen (D-Green Bay) and Rep. Katrina Shankland (D-Stevens Point) would require any state official who is running for or considering a run for federal office to submit a monthly report with state election officials detailing their expenses and who paid for them. Shankland said it’s “about accountability to taxpayers, it’s about being fully up front with the people of this state, and it’s about making sure that our precious tax dollars are not being used to bankroll a presidential campaign or anyone’s campaign.”

The legislation comes largely in response to trips Governor Scott Walker took earlier this year before launching his presidential run. Much of the travel, which included visits to the UK, Europe, Canada, and Israel, was billed as trade missions. However, the governor also met with several political officials and organizations in what many Democrats have argued was an effort to boost his foreign policy credentials ahead of announcing his candidacy for the Republican nomination.

Shankland argued the citizens of the state deserve to know if their hard-earned money was used to further someone’s goals of achieving higher office. Hansen noted that taxpayers spent more than $138,000 to send Walker to Great Britain earlier this year, while the costs are still unknown for the other trips.

Walker’s campaign has said it would reimburse the state for any campaign-related expenses while on those trips, while the Republican Jewish Coalition and Walker’s campaign group, Our American Revival, paid for the trip to Israel.