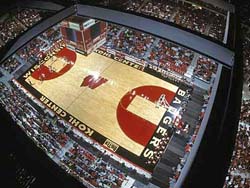 The Big Ten released it’s 2015-16 men’s basketball schedule on Thursday.  It has the Wisconsin Badgers playing three of their first four games at the Kohl Center.

Wisconsin opens league play Dec. 29th against Purdue, a team that finished third in the Big Ten last season at 12-6.

Rutgers visits the Kohl Center on January 2.  The Scarlet Knights gave the Badgers one of their two league losses a year ago but finished 2-16 in the Big Ten.

Wisconsin then travels to Indiana to face the Hoosiers in January 5.  The two teams will play in Madison on January 26.

Then Maryland comes to Madison on January 9.  The Terrapins are expected to be the favorites to win the Big Ten Conference this season.  That date should feature the return of former Whitefish Bay Dominican star Diamond Stone, who chose Maryland over Wisconsin.

Wisconsin opens the season November 13 against Western Illinois at the Kohl Center.  The Badgers will travel to New York City as part of the 2K Classic.  They face Georgetown on November 20 and either Duke or VCU on November 22.