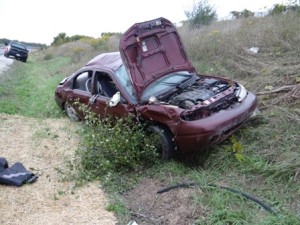 Three young children were seriously injured Sunday when the driver of a car they were riding in rolled over on I-41 in Dodge County. Two of the children were ejected, despite there being childrens’ car seats in the vehicle. “I beleive that two of them were improperly restrained,” said Dodge County Sheriff Dale Schultz. Schultz said investigators are looking at the car seats. The rollover occurred Sunday afternoon in the Town of Lomira. The children, ages 6 months, 1 year and 3-years-old, are all at Children’s Hospital in Milwaukee.

Schultz said the driver was taken into custody for operating under the influence. “It wasn’t alcohol related. We believe there was something else on board.” Preliminary investigation shows that the car was northbound on I-41 when the driver entered the west side gravel shoulder. The car then traveled across both lanes, struck an embankment and rolled before coming to rest on its wheels.
KFIZ