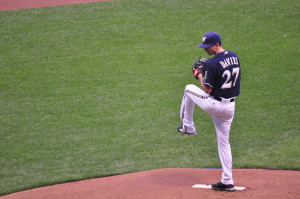 Zach Davies won his first big league game on Monday, holding Miami to a run on four hits over seven innings as the Milwaukee Brewers pulled out a 9-1 win over the Marlins.

The 22-year-old right-hander retired eleven straight hitters after giving up a lead-off single to Dee Gordon.  Davies struck out four.

The Brewers gave Davies plenty of offensive support.  They banged out 15-hits, including a Khris Davis home run in the fourth, his 18th of the season.

Hernan Perez had three hits and drove in three runs.

Taylor Jungmann pitches game two of the series for the Brewers  tonight.