You are here: Home / Education / Evers credits educators for ‘grit, perseverance, and resilience’ 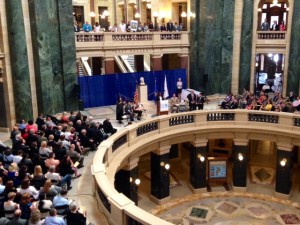 The state’s schools chief called on Wisconsin educators and their supporters to remain engaged, during his annual address Thursday at the Capitol in Madison. Tony Evers, the elected Superintendent of the Wisconsin Department of Public Instruction, credited the legislature for walking back Governor Scott Walker’s proposed budget cuts to education.

“At the same time though, they made major educational policy changes in charter schools, open enrollment and school choice, that will cost our schools millions of dollars that they desperately need,” Evers said. He credited the “grit, perseverance, and resilience” of educators in the face of an ongoing assault on public education.

Evers got a little choked up, as he recounted “the best part” of his job – visiting schools across the state of Wisconsin. “From Amery to Lancaster, Oshkosh to Cameron and dozens of other school districts in between, I have never once been disappointed in the dedication of our educators, and the engagement of our kids. Not once.”

The DPI secretary is a constitutional position, chosen once every four years in a nonpartisan statewide election. “It is unfortunate that a single legislator introduces another divisive distraction,” said Evers, referring to a proposed resolution from state Representative Joe Sanfelippo (R-West Allis) to make the position and appointment by the governor.

Evers, speaking with reporters after his speech in the Capitol rotunda, said the founders of the state intended the post to be an elected one. “And I support the basic premise that they said in 1848, and that is we value public education enough in this state, and consider it so important, that the people of the state have to elect the superintendent.”

Evers, who was last elected to the job in 2013, said he wasn’t surprised at Sanfelippo’s proposal. “I know Representative Sanfelippo has been critical of the department over a period of time. He throws some jabs from time to time, so it doesn’t surprise me. I just think it’s wrongheaded.”