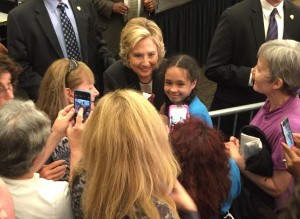 Democratic presidential candidate Hillary Clinton made her first Wisconsin stop of the campaign Thursday night at the UW-Milwaukee. Speaking to a standing-room only crowd, the former Secretary of State touched on issues ranging from student debt to several members of the Republican presidential field.

The event was billed as a grassroots organizing effort for women, and it was a topic Clinton touched on several times in her remarks. Clinton said Republicans often accuse her of playing “the gender card” whenever she talks about equal pay for women. She defended her stance, saying “if advocating for equal pay for equal work is playing the gender card, deal me in. I am ready to play as hard as I can.”

Clinton took on GOP frontrunner Donald Trump, offering criticism for past statements he’s made about women. She said “I live it when he’s criticized and he comes back and says he loves women. In fact, he says he cherishes us. Well, that’s really nice, but if it’s all the same to you Mr. Trump, I’d rather you stop cherishing women and started respecting women.”

The former First Lady also had criticism for Wisconsin Governor Scott Walker, who is also seeking the Republican presidential nomination. She said that “Walker thinks because he busts unions, starves universities, guts public education, demeans women, scapegoats teachers, nurses and firefighters, he’s some kind of tough guy on his motorcycle…A real leader. Well, that is not leadership…leadership means fighting for the people you represent and putting their interests first.”

Clinton’s visit to Wisconsin did attract some criticism. Lt. Governor Rebecca Kleefisch said earlier in the day at a GOP news conference that a “Hillary Clinton presidency is not at all what she will be promising just in order to get elected,” adding that “the American people are fed up with Hillary Clinton’s lies.”

WUWM contributed to this report.