You are here: Home / Sports / Kelly moves into third round of Fed-Ex Cup Playoffs 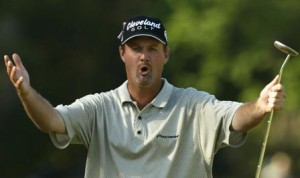 Rickie Fowler rallied from a two-shot deficit with five holes to play to win the Deutsche Bank Championship.  Fowler rolled in a 40-foot birdie putt on the 14th hole and played perfect golf the rest of the way to finish with a 3-under-par 68 and a one-shot win over Henrik Stenson.

Stenson was the leader after three rounds and maintained that lead for more than half of the final round before a double-bogey cost him the match.  Stenson finished runner-up for the second straight week.

Fowler won for the third time this year and moved to fifth in the world.  The victory assures he will be among the top five players in the FedEx Cup that has a clear shot at the $10 million prize in the Tour Championship.

Madison’s Jerry Kelly shot a 1-over par 72 and jumped 29 places in the point standings to 65th, good enough to make the Top-70.  Kelly will be playing at this week’s B-M-W Championship near Chicago.