You are here: Home / Crime / Courts / Madison officer threatened while breaking up fight 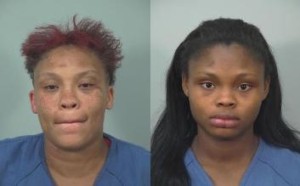 A Madison mother and daughter were arrested in connection with a street fight and alleged battery to a police officer. According to a release from the Madison Police Department, an officer stopped his squad car at the scene of a fight on the west side at around 6:30 p.m. Wednesday.

The officer said he saw a woman punch a man in the face and noticed she was holding a can of pepper spray. When he went to arrest the woman, the officer was surrounded by a crowd of people, and some voiced anti-police sentiments, including “we need to start killing these officers,” according to the release.

Forty-year-old Latonya B. James allegedly punched the officer in the face and grabbed him by the throat. James was arrested for Battery to a Law Enforcement Officer, Possession of Oleoresin Capsicum (Pepper Spray), Disorderly Conduct and Resisting/Obstructing. Her daughter, 20-year-old Nanyamka N. James, was arrested for Disorderly Conduct, Resisting and on a Parole Hold.

Police said a nearby resident, not involved in the melee, told a detective that the officer who was battered has in the past done a great job reaching out to residents and communicating with the neighborhood.