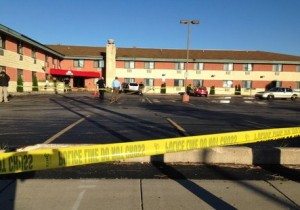 The scene of an officer-involved shooting in Ashwaubenon. (Photo: FOX 11)

An armed robbery suspect is dead, following an officer involved shooting near an Ashwaubenon hotel.

Police say it happened early Wednesday morning, after officers were notified the suspect in a case out of Manitowoc County was staying at the hotel. The suspect’s vehicle was pulled over near the location, when they reportedly pulled a gun and exchanged gunfire with the officer.

The suspect was fatally wounded. The officer was not injured. There were other people riding the suspect’s vehicle, but none were injured.

An investigation into the incident is ongoing.