You are here: Home / Packers / Packers lose Bulaga for 4 to 6 weeks 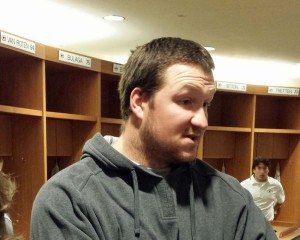 The news is worse for the Green Bay Packers and their starting right tackle Bryan Bulaga.  It was learned on Saturday that Bulaga is expected to miss four to six weeks because of the left knee injury he suffered in practice on Thursday.

The NFL Network reported that Bulaga had surgery to repair a torn meniscus.

The team initially said Bulaga’s injury wasn’t deemed to be serious and announced he would miss this Sunday’s game against the Seahawks.  But further tests revealed the meniscus tear.

It’s the same knee that Bulaga blew out in August 2013, when he tore his ACL in a preseason scrimmage.  He missed the entire season after undergoing surgery.

Don Barclay is expected to take over at right tackle in Bulaga’s absence with his first test coming against Seattle on Sunday night.