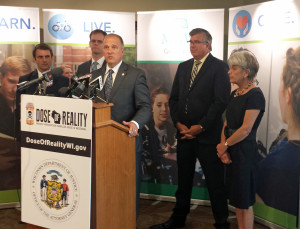 State officials are launching a new effort to tell people about the dangers of prescription drug abuse. The “Dose of Reality” campaign aims to encourage people to lock up their medications and to properly dispose of any unused drugs.

Attorney General Brad Schimel says medicine cabinets are a common target of those who become addicted to opioid painkillers, with addicts often using the homes of family and friends to find the medications. During a news conference Thursday at the Medical College of Wisconsin in De Pere, Schimel said “none of us would leave a loaded handgun sitting on the kitchen cabinet in our home with teenagers coming in and out, and yet few people think twice about what they have in their medicine cabinet with those same teenagers coming in and out.”

Schimel said many people are aware of how widespread and dangerous heroin has become, and yet most don’t realize prescription drugs kill more people each year than heroin and cocaine combined, or handguns. He also noted that nearly four out of five heroin addicts started with an addiction to prescription painkillers, and said “without the abuse of prescription painkillers, we might not even be talking about heroin at all in this state.”

The campaign encourages residents to make sure their prescription painkillers are kept in a secure location. Unused drugs should also be safely disposed of, using local drop-off locations that securely collect unused medications.

Mike Kemmeter of affiliate WHBY contributed to this report.