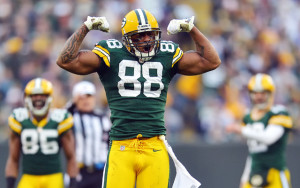 Jermichael Finley has retired from football.  The 28-year-old Green Bay Packers’ tight end bruised his spinal cord two years ago today, when he took a hard hit from a defender right after catching a pass in Green Bay’s victory over the Cleveland Browns.

Finley has not played since.

On Twitter on Monday, Finley wrote that he’s “forever grateful”  to play for the “best organization, the best coaching staff and the greatest quarterback alongside the best teammates” in the N-F-L.

The Packers are in their bye week after starting their current season with a six-and-oh record.  Next up is a November 1st game against unbeaten Denver.