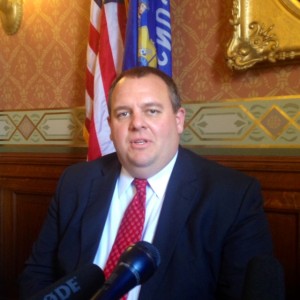 “Functionally what this bill will do, is carve out exceptions for political crimes, crimes that are as serious as bribery in office,” said state Representative Dana Wachs (D-Eau Claire). “Those crimes will not be able to be investigated by the John Doe probe.”

“The whole idea that this in any way exempts politicians from John Doe investigation is a patent falsehood,” said the bill’s Assembly author, state Representative David Craig (R-Big Bend), adding that politicians who break the law will still be open to prosecution by traditional methods, such as the grand jury.

Wisconsin’s John Doe proceedings are similar to grand jury investigations. Prosecutors secretly present evidence to a judge, who decides whether a crime has been committed. Prosecutors can also force witnesses to testify in secret.

“If the grand jury process was so problematic, and it was so difficult to have a prosecutor get someone into court and ultimately prosecuted, other states would have adopted the John Doe process, and that hasn’t happened,” said Assembly Speaker Robin Vos (R-Rochester).

The measure was authored largely in response to a pair of investigations surrounding Governor Scott Walker – one targeting his office when he was Milwaukee County executive and another that was looking in to potentially illegal coordination between his campaign and conservative groups during the 2012 recall election.

“I think it’s ironic that, if we did not focus on the fact that Governor Walker was the highest profile case that really brought this to light, I would think that a lot of Republicans should look and say ‘a star chamber concept, where people are kept secret, they don’t have access to adequate counsel,’ that should be something that attracts bipartisan support,” said Vos, who accused Democrats of suffering from what he called “Walker derangement syndrome.”

“I am sure there are dozens of other people out there, that are political crooks, that are counting on this bill passing,” said state Representative Peter Barca (D-Kenosha), the minority leader in the Assembly. “They know they’re guilty, they’ve done things that are improprer, and there’s a good chance that they’ll be able to skate.”

In the state Senate, minority Democrats objected to holding a final debate and vote Tuesday, prompting Republican majority members to recess until 12:01 a.m. to vote on the legislation, which passed on a 18-14 party line vote.

The Assembly may have to return to approve the measure for a second time on Wednesday afternoon, but that will be a mere formality before the bill goes to Governor Scott Walker for his vote.