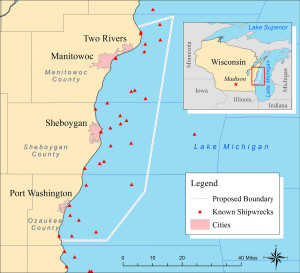 A map of the proposed national marine sanctuary on Lake Michigan. (Image: NOAA)

The possibility for having a national marine sanctuary along the shoreline of eastern Wisconsin is a step closer to becoming a reality.

President Barack Obama announced Monday that an 875 mile stretch of Lake Michigan is one of two U.S. locations being considered for the designation by the National Oceanic and Atmospheric Administration (NOAA). The area includes Wisconsin’s eastern shoreline from Port Washington to Two Rivers, and is home to at least 39 known shipwrecks. Of those, 15 are on the National Register of Historic Places.

Rolf Johnson, director of the Wisconsin Maritime Museum in Manitowoc, was greatly excited by the news. Johnson said it “has been years in the making” and serves as recognition of the significance of the area.

The project now heads in to a review and public comment period, where NOAA will draft a management plan and potential regulations for each site. The agency will then make a final decision on whether to grant sanctuary status.

The other location being considered is Mallows Bay in Maryland, which rests in the tidal waters of the Potomac River.

Damon Ryan at affiliate WOMT contributed to this report.