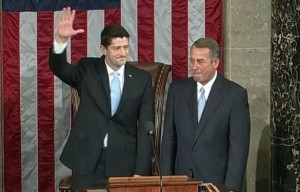 Wisconsin’s Paul Ryan is Speaker of the House. The Janesville Republican, elected Thursday morning, asked members to pray for one another. “And I don’t mean pray for a conversion. Pray for a deeper understanding,” Ryan said.

“The House is broken,” Ryan said. “We’re not solving problems. We’re adding to them.” Ryan said he’s not interested in laying blame or settling scores, as he takes the chair vacated by the embattled John Boehner.

Ryan said he’s looking to make some changes in process. “We need to let every member contribute, not once they’ve earned their stripes, but now,” he said. “I come at this job as a two-time committee chair. The committees should retake the lead in drafting all major legislation.”

Ryan also gave some indication of his agenda. “How reassuring it would be if we actually fixed the tax code, put patients in charge of their health care, grew our economy, strengthen our military, lifted people out of poverty and paid down our debt,” Ryan said to cheers and applause from Republican members.

At age 45, Ryan is one of the youngest Speakers ever, and the first ever from Wisconsin. He secured all but 9 Republican votes, mostly members aligned with the Tea Party Freedom Caucus.