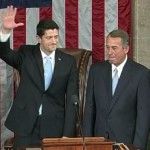 House Speaker Paul Ryan wants Republicans to unify – by opposing President Obama. Ryan was elected Speaker on Thursday and spoke to Wisconsin media on a conference call Friday morning. The White House said Obama called Ryan to offer his congratulations, but the new Speaker made it clear there’s little common ground. On immigration reform: “I think it would be ridiculous to try and attempt for immigration reform, with a president we simply cannot trust.”

Ryan said he’s confident the sometimes fractious House GOP caucus can unify. “We can’t simply be an opposition party. We have to be an effective alternative party, offering the country a clear vision and a different way forward. That is something I believe we can absolutely unify around,” Ryan said. “We believe the country is headed in the wrong direction, and we believe the president is leading it in the wrong direction.”

While Ryan said he remains willing to work with Democrats on areas where common ground can be found, he stressed that he won’t back off of his conservative principles. “I believe that you can find common ground without compromising principle, for the good of the country. But if there are areas where you do not agree, were you think the country’s headed in the wrong direction, you have an obligation to say how you would do things differently. I think that’s what the people deserve, and I think that’s what the people want.”