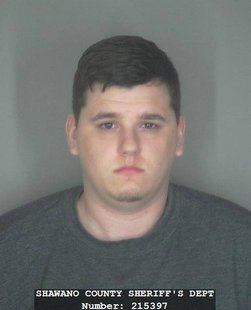 Shawano County law enforcement investigators are crediting a mom for helping them catch an alleged child sex predator. Deputies arrested 23-year-old Nicholas Bennett of Portland, Oregon, on Friday, after he allegedly arranged to meet a 13-year-old Shawano boy who had attended his traveling basketball camp three days before.

Shawano County Sheriff Adam Bieber sad Bennett allegedly began texting the child about his athletic skills, but then they gradually became sexually suggestive and explicit. “The kid was using the mom’s cell phone for the day, and she saw some of the text messages the coach was sending the boy and it was very concerning obviously,” Bieber said.

After seeing the messages, she contacted the sheriff’s office, and investigators then took over the conversation. Deputies arranged a meeting with Bennett for Friday night, and that’s when he was arrested.

“The lesson is that there are predators out there that want to harm and abuse our children and we have to be vigilant as parents,” Bieber says. “So it’s very important for parents to be very active and involved in their children’s devices and do routine checks on them.”

Bennett appeared in Shawano County Circuit Court on Monday and is charged with using a computer to facilitate a child sex crime and attempted child enticement. He’s being held on a $100,000 cash bond.

Bieber said it’s possible that the investigation will lead to more victims, possibly in other states. “What I read through the (criminal) complaint that this guy, no doubt, does this often,” he said. Investigators are trying to find a schedule or itinerary of where his traveling basketball camp has been, and where they were headed.