You are here: Home / News / Walker insists campaign can pay off debts 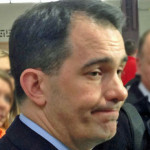 Wisconsin Governor Scott Walker insists he’ll have enough money to cover the expenses from his failed presidential campaign. Campaign finance records filed with the Federal Elections Commission and released this week show Walker raised about $7.5 million during his brief 71-day run for the Republican presidential nomination. He spent about $6.5 million. The campaign has about $2 million in outstanding debt.

During a strop in Green Bay on Friday, Walker said those bills would be paid. “The top on our list are making sure the taxpayers, for any security expenses, will be paid just as they have in the past. But beyond that, we’ll wrap up, and it will show in the next report how our expenses will be paid, just as we have in the past,” Walker said.

The governor wouldn’t elaborate on where that money will come from. “The next report will show that we’ll be more than able to adjust for anything that’s left over,” Walker said. The next campaign report will be filed with the FEC in January.

Walker, who started out with promising poll numbers among a large field of Republican contenders, saw his ranking plummet in the weeks leading to his September 21 announcement that he was dropping out.