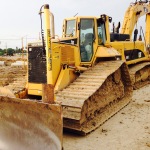 Governor Scott Walker made his case on Tuesday, to keep major road construction projects on track – calling on the Legislature’s budget committee to approve $200 million dollars in borrowing for this year. Walker would later request an additional $150 million for next year, to eliminate any potential delays.

“Two hundred million they can approve right away. The 150 million we’re hoping that they subsequently approve when they see that we’re able to put this to work right away,” Walker said during a press availability near the Highway 10/441 construction zone.

In addition to the Fox Valley site where Walker held his press conference, the projects that are currently being delayed are I-39/90 from the Illinois state line to Madison, Highway 151/Verona Road in Madison, Highway 23 between Fond du Lac and Plymouth, and Highway 15 near New London in Outagamie County.

State Senator Alberta Darling (R-River Hills), a co-chair of the Joint Finance Commmittee, indicated that there was little support for the request among Senate Republicans. “We’re in a very tight box, and the governor has put us in this box,” Darling said.